Sharing the
passion of music
with the World…

Songs for Change a Playlist of Songs & Videos

Best way to hear our .

Don’t Miss the newest:
Kiss Your Lonely Goodbye, and other Music and music Videos

The music and videos of John A. Salerno / Polytech Records Youtube Channel… Who? John Who? Just some dude trying to cook up new stuff influenced by the songs that blend the human heart (Yeah, I still got one of those!), the dreams of the 60s (The Bobs” – Marley and Dylan, and the rest of those hippie-types), and wonders of the 21st Century,(OMG – Every day fills us with things to wonder about 🙂 )

I realized this morning looking back on the songs I’ve written, all of them have a common thread: Social Harmony – Whether a world without war or a society without discrimination – My songs all contain that dream, hope, drive and energy. More love; less war! In the end, tiny influence that a single person can have, but it’s always there! It’s the creative fuel and the sincerity that channels each song.

Some of the important themes that keep surfacing are:

Reading books not judging covers… (Looking beneath the surface to appreciate true value…)
Life, in simple terms, is a relationship we get on a loan, with a snippet of a timeline. Like a movie ticket for an interactive movie we live in. If you don’t learn more about all of these relationships then the expression: “You live and you learn…”, becomes an empty: “You exist and you exist…” These days, like so many people who love to sing, my voice rarely loves to cooperate, and my budgets aren’t even able to keep up with my own potato chip addiction… This newest song, called “Potato Chips”, is one of two wishes I would make if I find a magic lamp.

Wish One: Potato Chips that make people thirsty for PEACE!

Wish Two: To make a difference to anyone who needs a friend who cares!

In the early 1990s, John A. Salerno (that is I… Except, shy people prefer to refer to themselves in the third person.) still dreamed of being a rock star. Maybe he was a “legend in his own mind”:) But he was too shy and introverted and seriously lacked the “in-your-face” “chutzpah” required to never give up!

Despite his passive approach, in the lates 1980s, the self-proclaimed worst-vocalist-in-the-world, pseudonym, at the time: JAGZ, managed to get several of his rough demos to receive passionate welcomes and find their way to such unlikely warm ears as:  Australia Radio stations, CMJ (College Media Journal) “Certain Damage” CDs, US College radio, Tokyo, Japan Radio, and even some of the hardest to approach DJs of the time – all asking for more songs. But instead, John wilted! He started to feel as if maybe it would suit his personality more to be a behind-the-scenes songwriter. Maybe this company name would be more appropriately called “Wallflower Records”:)

More and more, these days as a parent, John’s life was surrounded by children, and they became all John felt the passion to write about! Year by year, getting to be more like Mr. Rogers and less and less like Mick Jagger… (Despite the similarity in pitch accuracy!) In other words, when I try to write a song like Adam Levine’s “Girls Like You”, it turns out more like “Kids Like You”! Coming to terms with the reality that maybe my karma did not include me becoming a rock star took away a lot of the pressure! Now I can enjoy my music! That’s what Polytech Records hopes to share with you here!

Influences that will always be the elusive bar I reach for include songwriters and performers from every era: The Beatles – as a magical whole-greater-than-the-sum-of-its-parts, Rolling Stones, the roots of rock: Chuck Berry, Buddy Holly, Eddie Cochran, Roy Orbison, Little Richard, Paul Simon, Bob Dylan, Bob Marley…

Kiss Your Lonely Goodbye – the single

This song was inspired by the pandemic’s effect of making more lonely people on planet earth than ever before in its history!

It is now available on Youtube Music and all streaming services worldwide! 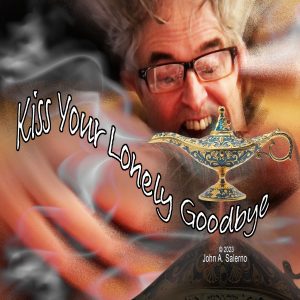 You have Successfully Subscribed!

We welcome you to provide feedback – send email to info@PolytechRecords.com